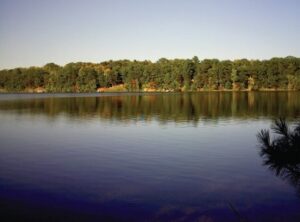 Managing the water quality of lakes can be a challenging job once invasive aquatic plants gain a foothold. But there are a variety of safe, cost-effective products and services on the market today that can help communities to preserve some of their most important assets.

Eurasian Watermilfoil and curlyleaf pondweed were becoming a problem for Beaver Dam Lake in Cumberland, Wisconsin. A significant number of homes surround much of the 1,100-acre lake, and the double-basin lake sees a lot of recreation use in terms of boating, fishing and swimming. However, milfoil – and to a lesser degree, curlyleaf – weeds had become so bad, that it was becoming almost impossible to boat through what had been one of the busiest sections of the lake.

The Beaver Dam Lake Improvement District hired Lake Restoration to manage the problem. On the west lake, more than twenty-five milfoil sites were treated, using a maximum dose of an aquatic herbicide due to the smaller patches of weeds and greater depth that existed in that lake. In 2007, 142 acres of milfoil were treated; 104 acres in 2008; and 58 acres in 2009.

On the east lake, a few large segments where the water depth was much shallower, significantly lower concentrations of herbicide were used to achieve the same effect. The company treated 60 acres of milfoil on East Lake in 2006, 120 acres in 2007; 18 acres in 2008; and 107 acres in 2009.

Oftentimes, people going into these treatments think the solution is to find a quick, short-term fix. Beaver Dam Lake is an excellent example of how lake management requires a long-term approach to a problem. Although the west basin shows definite progression in the reduction of milfoil, in contrast the east basin showed signs of improvement and then regression. You have to take a long term view and then manage intensively. Only then will you see a gradual reduction of invasive weeds.

The goal of these treatments is to limit the amount of milfoil and curlyleaf, and at the same time promote the growth of the native aquatic plants. By taking out the invasive vegetation, it provides greater opportunity for the native plants to grow. For example, a Floristic Quality Index study conducted by Minneapolis-based Barr Engineering showed that both the volume and quantity of the native aquatic plants in Beaver Dam Lake increased during the treatment period – going from 13 species in 2005 to 26 species in 2008.

In another case, Lake Restoration was hired in 2004 to mitigate a growing problem of curlyleaf pondweed that was taking over Medicine Lake in Plymouth, Minnesota. The weed had infested about 325 acres of the 397-acre lake. The density of the curlyleaf pondweed was extreme. In some parts of the lake, there were 600+ individual stems of the invasive weed within one square meter. Curlyleaf grows up to the surface of the water, and then it typically dies back at the end of June and early July. As the plant mass dies off it releases nutrients into the lake, which encourages algae growth that can negatively affect the water quality.

Ultimately, almost the entire shoreline of Medicine Lake was treated in 2004, 2005 and 2006 for control of the curlyleaf. No treatment was made in 2007, and in 2008 about 80 acres of the lake was treated. This year, roughly 62 acres of the lake will be treated – about one-fifth of the original infestation. That is a dramatic change, showing that effectively managing the problem requires a long-term commitment.